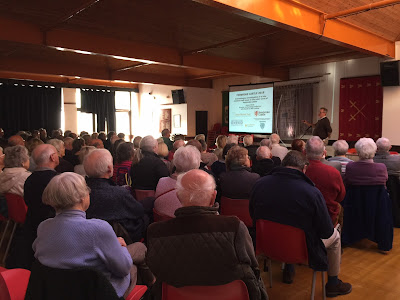 Saturday's meeting in Pembroke Town Hall drew a very large audience of around 120 people.  Entitled 'was this the birthplace of Henry VII?' Archaeologist James Meek gave a fascinating, illustrated talk about the 2018 excavation in Pembroke castle, which was undertaken by Dyfed Archaeology Trust.
James stated that within Pembroke Castle the outline of a building regularly reappears as parch marks in the grass.  Its floor plan suggests that here was once a late medieval double-winged hall-house, which was uncovered in the 1930s' renovation of Pembroke Castle, but not recorded.
In the course of this investigation, James said that 2 trenches were excavated across the building  remains: trench 1 was positioned to cross the area of the possible cess pit and a corridor within the building (thought to have been exposed in the 1930s excavation), while trench 2 targeted the north western corner of the structure.  Overall the evaluation confirmed the presence of a large, free standing stone building within the Outer Ward of the castle, the remains of which indicated it was domestic and of high status.  However, James stressed that the building could not definitely be confirmed as being of late medieval origin, although the evidence would indicate that this was very likely.  Of great interest and excitement of course is the fact that if the structure is of that date and was standing at the time of Henry Tudor's birth at the castle on 28 January 1457, then it was very likely that he would have been born here as opposed to a tower on the outer wall.
For more information follow this link
http://www.dyfedarchaeology.org.uk/…/pembrokecastle2018.html


Posted by Linda, pembrokehistory@live.co.uk at 11:22 AM