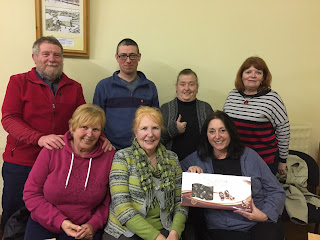 Joint winning teams of our Quiz Night last Friday were 1. Graham & Wendy George and Michael Howlett and 2. Pam Evans, Alison Johns and Jill Gowing.
Thanks go to Linda Brown who stepped in at the last minute as Quiz Master to cover for Rose Blackburn who was indisposed.
Next quiz will be on May 19th - tickets at the door are just £4 which includes a buffet.
Posted by Linda, pembrokehistory@live.co.uk at 9:49 PM No comments:

A piece of Pembroke's past comes home 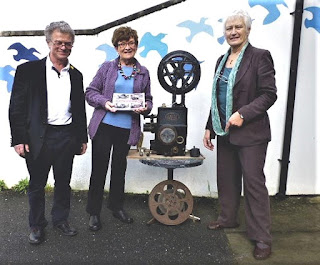 On Thursday March 9th Pembroke Museum welcomed a very special artifact, a real echo from Pembroke's past.   This was the old Kalee 12 projector from Haggar's cinema which, since 1986, has been looked after by the owners of Tenby's Fourcroft Hotel, Cath and Chris Osbourne who can be seen in the photograph presenting the projector to Vicki Haggar.
The projector had been on display in the Fourcroft Hotel's Hollywood bar but when Vicki heard that the Fourcroft Hotel was to be sold, she arranged that the projector be returned to Pembroke. It now forms an important addition to Pembroke Museum's Haggar collection which includes the complete archive of William Haggar's remaining silent movies which can actually be viewed there.
Last November, Pembroke & Monkton Local History Society published 'From Mummer's Booth to Silver Screen: the Life and Times of the Haggar Family' written by Vicki Haggar. Her great grandfather, William Haggar, was a pioneer of the early cinema in Wales and achieved international success with his groundbreaking moving pictures which were shown first in travelling cinemas or bioscopes.  The Haggar family later established a chain of cinemas, including Pembroke which was opened in 1931 by Will Haggar Junior. On his demise it was carried on by Vicki's grandfather Walter Haggar, then father Len and finally brother John until it closed finally in 1984.
Vicki presented a copy of her book to Cath and Chris and the Museum Committee join her in thanking them for caring for this most important piece of Pembroke history.  It will be much appreciated by Pembroke people who still regard Haggars with great affection as is   demonstrated by the popularity of the History Society's Haggars' Nights.
Pembroke Museum is situated in the upstairs courtroom of Pembroke Town Hall and is open weekday mornings from 10am to 12.30pm, extending to 3pm from April 18th. Entry to the museum is free and there is a lift for disabled access.
Posted by Linda, pembrokehistory@live.co.uk at 9:32 PM No comments:

As a theme for St David's Day, we chose the Princes of Wales.  Linda Asman gave a talk which traced the evolution of Wales into a country of separate kingdoms, the greatest of which was Gwynedd.  Unity was almost achieved in the reign of Llewellyn the Great and, after him, during the reign of his grandson Llewellyn the Last who was in fact recognized as Prince of Wales in 1267 by Henry III, King of England.  His power was greatly reduced by Henry's successor Edward I and he was killed in a skirmish at Cilmeri,near Builth Wells in 1286.  The title of Prince of Wales was  adopted by Edward who declared his own son Edward Prince of Wales at Caernarfon in 1301. The title has since been bestowed on the heir to the throne.
After the talk, a St David's Day lunch was provided jointly with Monkton Priory Church. The event proved even more popular than last year and a total of £419 was raised.
Posted by Linda, pembrokehistory@live.co.uk at 7:44 PM No comments: