It was full house at Pembroke & Monkton Local History Society’s New Years Quiz on Friday with all 15 tables taken!  Competition was fierce therefore, and the worthy winners were (left to right in the photograph) Bob and Amanda Schopp and Gaynor and Peter Thomas pictured here with Question master Rose Blackburn (far left). The ladies of the History Society produced their usual high standard of buffet which was enjoyed by all. Thanks to them and to Rachel and Diana for conducting the raffle.
The next Quiz Night will be held on Friday, March 20th at Monkton Church Hall, 7.30pm. 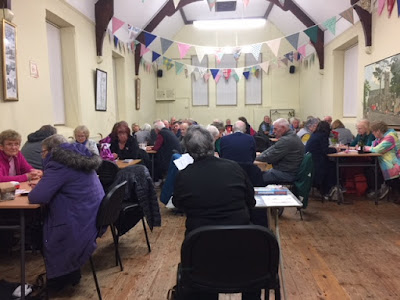 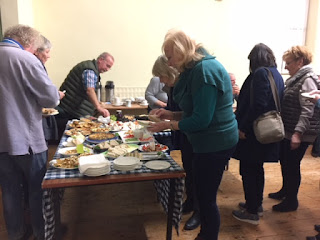 Posted by Linda, pembrokehistory@live.co.uk at 9:01 PM No comments: 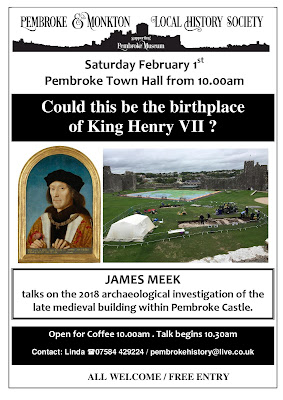 Posted by Linda, pembrokehistory@live.co.uk at 3:39 PM No comments:

After the long Christmas break, Pembroke & Monkton Local History Society held its New Year’s get-together on Saturday - the coffee morning and talk drew large numbers.  ‘Caldey Island, a glimpse into its fascinating past' proved a popular topic and was presented by Vicky Tomlinson, volunteer warden with the Pembrokeshire Coast National Parks.

Vicky’s talk took us back some 1,500 years with the discovery of  archaeological finds unearthed during the excavations in three of  Caldey’s caves Nanna's Cave, Potter's Cave and Ogof–yr-Ychenbetween between 1911 and 1970.

One of the holy islands of Britain, Caldey is best known today for its monastery.  Monastic settlement, Vicky told us, stretched back to the sixth century when the island was known by its Welsh name Ynys Pyr, named after its first Abbott Pyr. Later, during the time of the Viking activity in the area in the ninth century, we see the emergence of the name by which we know it today – Keld or Kold-ey (meaning Cold Island).

Caldey thrived in the Middle Ages as a daughter house of St. Dogmaels' Abbey and lasted until the Dissolution of the Monasteries in 1536 when it passed into private hands. The current abbey was built in 1910 by Anglican Benedictine monks but financial problems beginning in 1925 led to the 1929 purchase of the property by Belgian Cistercians.

Posted by Linda, pembrokehistory@live.co.uk at 8:47 PM No comments: 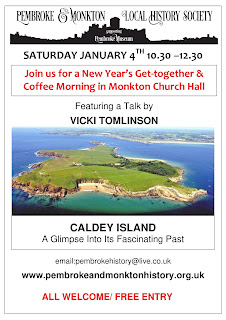 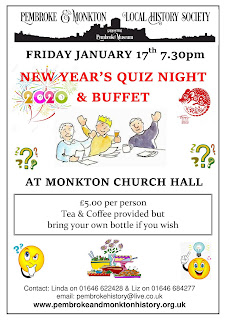 Posted by Linda, pembrokehistory@live.co.uk at 5:11 PM No comments: