John Evans talks about Pembroke Dock and its Flying Boats 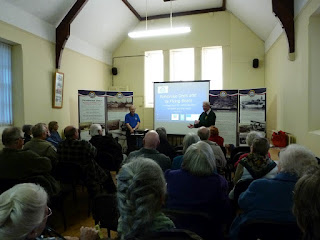 Friday evening at Monkton Priory Church Hall we were pleased to welcome John Evans who kindly agreed to talk to us about his exciting Sunderland Project which has won world wide recognition.  In the early days of our Society we went on a visit to the Flying Boat Centre in Pembroke Dock which has been a great success story attracting over 21.000 visitors. The Sunderland Centre tells the Story of the Sunderland 79044 and the stories of some of the pilots who flew it.
John told us how it had all begain " In November 1940 there was a huge gale - one of the flying boats went missing, disappearing without trace when it came off its mooring.  Happily noone was killed.  But the T9044 was lost for decades - noone knew of its whereabouts.  But at the end of the 1990s parts were recovered - at first its identity was not known - until August 2003 the engine was recovered.  Then we knew it was a Sunderland!
Posted by Linda, pembrokehistory@live.co.uk at 9:29 AM No comments:

We visit the National Library of Wales 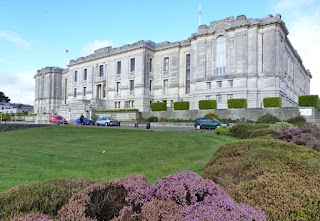 On Tuesday some us made the long drive to Aberystwyth to visit our National Library.  We were given a tour of the Library and it was so  interesting to go beyond the areas of public access and glimpse the sheer vastness of the material stored there: 118 miles of shelving! While it is predominantly a library, it is actually much, much more housing a family history collection, manuscripts, maps, photographs, paintings of people and places in . It is also home to the National Screen and sound Archive of Wales and I made prior arrangement with the Library to visit this as Vicki wished to see the Haggar collection, William Haggar being her great grandfather.   Pride is taken in the Haggar connection, ’ own contribution to cinema history, and it is not everyday that a visit is made by a direct descendant!  There is a Haggar Room and we were shown a 1905, 35mm silent film projector which was believed to have been named and used by William Haggar himself.

After the tour, we had lunch at the Library’s restaurant and then went our own ways to delve into the collections and visit the exhibitions, which are marvellous.  But time passed all too quickly and with so much to see all of us felt we must come again  … and again. All agreed that it was a fascinating experience.
Posted by Linda, pembrokehistory@live.co.uk at 8:18 PM No comments: 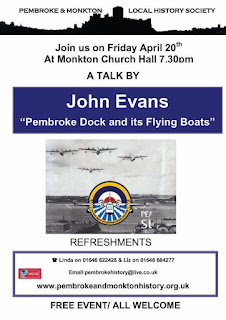 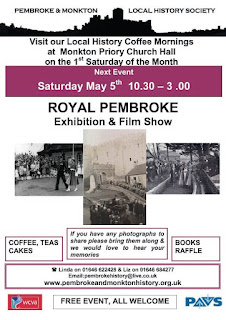 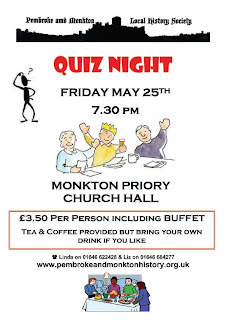 Posted by Linda, pembrokehistory@live.co.uk at 9:55 PM No comments: No study of Pembroke's history would be complete without mentioning the Owens of Orielton. Their estate lies just a few miles south of Pembroke and their former home, Orielton House, is now in the ownership of the Field Studies Council. So, a visit was arranged and we had a very warm welcome from the Head of Centre, Chris Millicon.
The Owens of Orielton played a prominent part in the history of Pembroke for three centuries: they were sheriffs of Pembrokeshire, Members of Parliament and Mayors of Pembroke. The grandson of Elizabeth and Hugh, also named Hugh represented Pembroke in Parliament through the years leading up to the Civil War, and was made a baronet in 1641: this tradition carried on through the generations. His grandson Arthur famously rode to in 1702 to give the casting vote for the Act of Settlement which secured the Hanoverian succession. Despite the motto on the Family Coat of Arms “Honesty is the best policy”, tales of bribery and election rigging in fiercely fought elections abound. The direct line died out in 1804 and the estate was willed to John Lord, who changed his name to Owen, but it was his extravagances that led to bankruptcy and the sale of the estate in 1857. Many houses in Pembroke itself were also auctioned as the family owned much of Pembroke.
Posted by Linda, pembrokehistory@live.co.uk at 12:24 PM No comments: