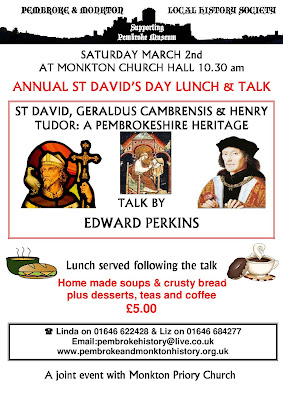 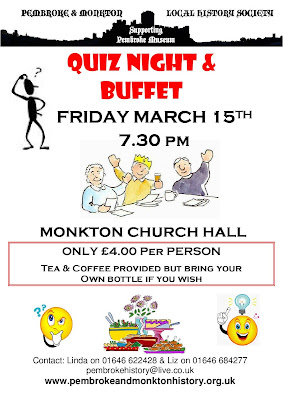 Posted by Linda, pembrokehistory@live.co.uk at 8:55 PM No comments: 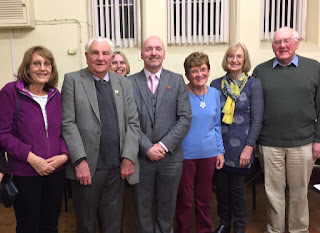 Simon Hancock was  guest speaker  at this year's AGM, giving a fascinating talk on the 'History of Haverfordwest in 30 artefacts'.  Always a popular speaker, the AGM was well attended.  Chairman's Annual Report (published on the Society website www.pembrokeandmonktonhistory.org.uk ) began with a tribute to our much loved president, George Lewis, who sadly passed away last autumn.  Unanimously, Frank Harries was elected President and Linda Asman, Chairman.  She extended thanks for the great help and support given by the volunteers for the work they do in the running of the Society and  Pembroke Museum which has proved so successful.


Posted by Linda, pembrokehistory@live.co.uk at 8:52 PM No comments:

Our AGM on February 15th 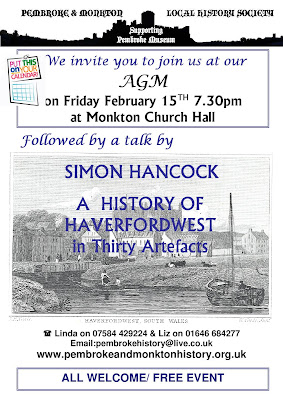 Posted by Linda, pembrokehistory@live.co.uk at 3:19 PM No comments:

Thumbs up for William Marshal 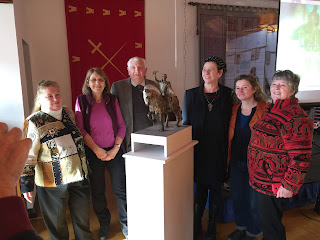 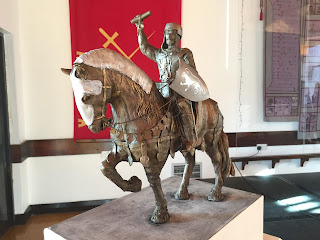 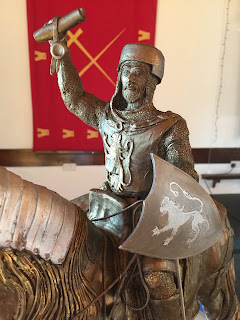 At a public meeting in Pembroke Town Hall on Saturday, February 2nd, the campaign for a statue of William Marshal, Earl of Pembroke was launched.  This was an opportunity for the community to come together to have their say and to examine the maquette of the William Marshal statue, which was presented by sculptor Harriet Addyman. Comments and suggestions were welcomed.  There was overwhelming support for the statue and gratifying that so many attended.
The maquette was commissioned by the History Society after having received a very large donation of £25,000 from Wales Community CIC. Having been impressed by the Henry VII statue, the money was conditional on being invested in a statue commemorating another  of Pembroke's great figures - there are many!  As with the Henry VII statue campaign, this will be a community wide project and it is hoped that other groups will join in with the fundraising.  The Society is working in partnership with Pembroke Town Council which will be administering the statue fund.
All proceeds of the morning were donated to the statue appeal - in all £303 was raised from sale of coffees, raffle and donations.
Posted by Linda, pembrokehistory@live.co.uk at 3:16 PM No comments: