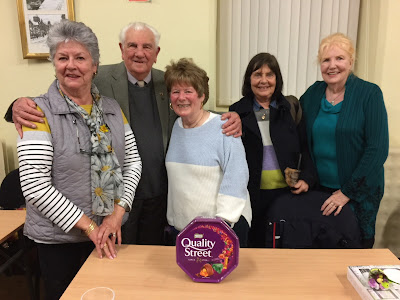 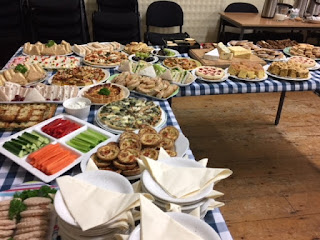 All tables were taken at this month's Quiz Night!  Against stiff competition the worthy winners were (left to right) Meg Burrell, Melanie Phillips, Diana Turberville and Pam Evans pictured here with Quiz Master Frank Harries.
The lovely buffet was prepared by the ladies of the History Society Committee and I think this has a lot to explain the popularity of the Quiz - at only £4 a ticket and as much as you can eat - that surely  is great value for money! £223 was raised.
A special thank you to Frank Harries for standing in as Quiz Master in the absence of Rose Blackburn and to Des Sinclair for preparing the questions.
Our next Quiz Night will take place on May 17th .
Posted by Linda, pembrokehistory@live.co.uk at 5:01 PM No comments: 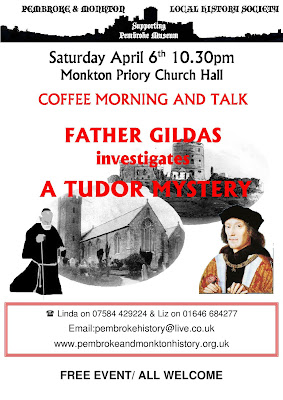 Posted by Linda, pembrokehistory@live.co.uk at 9:19 PM No comments: 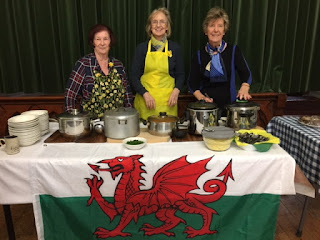 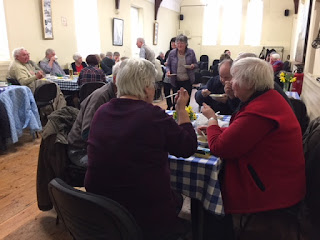 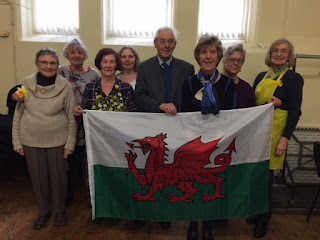 The Society held its annual St David’s Talk and Lunch on Saturday morning, March 2nd at Monkton Church Hall.  Guest speaker was Edward Perkins, whose talk was entitled ‘St David, Giraldus Cambrensis and Henry Tudor: a Pembrokeshire Heritage’.  This was a fitting subject for St David’s Day.  Edward’s talk began with the life of St David and the founding of his cathedral which was to provide a link to two other of Pembrokeshire’s famous sons: Giraldus Cambrensis and Henry Tudor.  The medieval chronicler Giraldus, grandson of the legendary Princess Nest and born in Manorbier Castle, strived to become the Bishop of St David’s, an ambition in which he was ultimately frustrated.  Henry Tudor, famously born in Pembroke Castle, also links us to St David’s Cathedral as here can be found the tomb of his father, Edmund Tudor.  Originally buried at Greyfriar’s, Carmarthen, the tomb was removed to St David’s by his grandson Henry VIII following the dissolution of the monasteries.
It was an interesting talk and well appreciated by the audience which, afterwards, was able to enjoy an excellent meal provided jointly by the ladies of the History Society and Monkton Priory Church.
It was gratifying that so many people – around 60 - supported the event, the proceeds of which were donated to Monkton Priory Church.  In all £250 was raised and a big thank you given to the ladies who worked so hard to provide the meal.  They are pictured here (left to right) Sue Clague, Jill Holmes, Ruth Wilcocks, Liz Jenkins, guest speaker Edward Perkins, Jill Ensom, Pauline Davies and Ann Lankshear.

Posted by Linda, pembrokehistory@live.co.uk at 9:16 PM No comments: