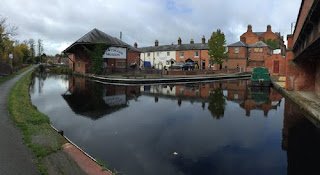 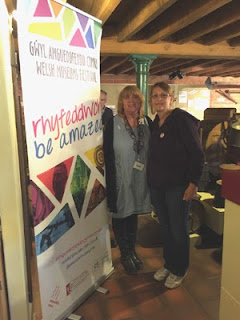 Stuart and I attended the Federation of Welsh Museums and Art Galleries AGM.  Met Hazel of the People's Collection Wales, pictured here.  The Meeting took place at the Powysland Museum, Welshpool - lovely day and good to meet up with others in the field.
Posted by Linda, pembrokehistory@live.co.uk at 9:27 AM No comments: 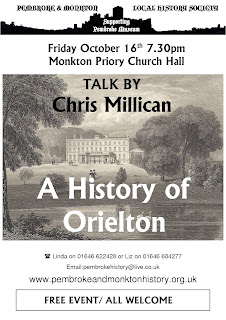 Chris Millican, Head of Orielton Field Centre addressed a well attended meeting of the History Society in Monkton Church Hall.  Chris gave a fascinating talk about the medieval origins of the house and its transformation into the Country seat of the Orielton family.  Since the demise of the Owen family and the sale of the estate, the Orielton House has changed hands several times until acquired by the Field Studies Council and Chris brought us up to date with its restoration and the work of the FSC.

Thursday, October 8th was a major event in Pembroke's calendar - the opening of Pembroke's Michaelmas Fair, an age long tradition dating back to the charter fairs of the Middle Ages.  A tradition Pembroke still holds dear and popular with all.

Posted by Linda, pembrokehistory@live.co.uk at 9:13 AM No comments:

A statue of Henry VII - the campaign begins! 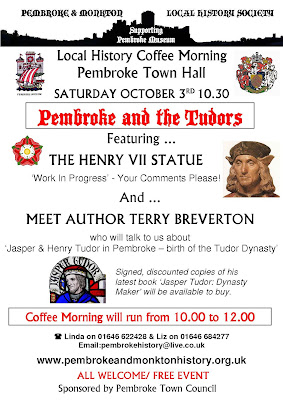 Saturday October 3rd was an important day for Pembroke: a public meeting was held in Pembroke Town Hall to launch the campaign for a statue of Henry VII.  The event, sponsored by Pembroke Town Council, was intended as a public consultation to invite discussion on the statue project and was organised by Pembroke & Monkton Local History Society which also hosted a Coffee morning for the occasion.Proceedings were opened by Pembroke Mayor, Pauline Waters, who highlighted the importance of a Henry VII statue in promoting Pembroke as the birthplace of the Tudor dynasty.  She thanked all those present for attending and for the support not only of the Town Council which has commissioned the maquette, a miniature of the intended 8 foot high statue,  but also of the County Council which  has agreed to match fund it as part of their Town Centre support programme.  A fundraising campaign is to be launched to raise the rest! 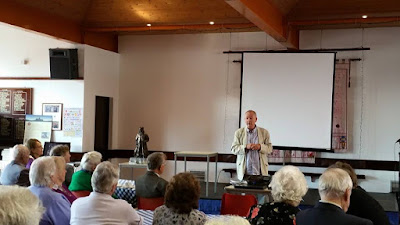 Also at the event were no less than 3 Tudor authors - Tony Riches, Nathen Amin (author of the Henry VII Society website) and Terry Breverton who gave a talk 'Jasper and Henry Tudor in Pembroke - the birth of a dynasty'.

see our website www.pembrokeandmonktonhistory.org.uk
Posted by Linda, pembrokehistory@live.co.uk at 10:24 AM No comments: