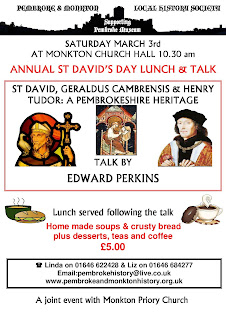 Posted by Linda, pembrokehistory@live.co.uk at 10:57 AM No comments: 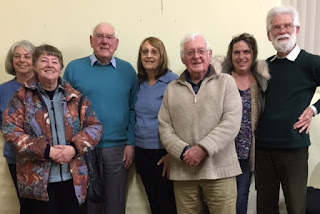 The AGM took place on Friday with little change:  all officers and Trustees/ Committee Members were returned unopposed. Applications for committee were invited but no takers although any members wishing to get involved will be very welcome. We are looking in particular for people with good IT skills and also cooks to help with all those buffets we supply for the Quiz Nights and coffee mornings!
Pictured above are some of the committee with star of the evening George Palmer (3rd from left) who gave us a lovely evening of nostalgia by showing his wonderful slides, taken over many years whilst a postman in Pembroke. Everyone enjoyed the evening and want George to give them another show in our next programme. 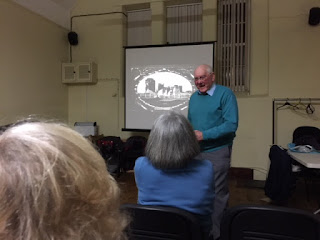 Posted by Linda, pembrokehistory@live.co.uk at 10:53 AM No comments: 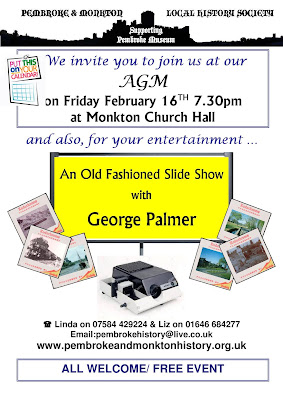 Posted by Linda, pembrokehistory@live.co.uk at 9:37 PM No comments:

YEAR OF THE SEA - February 3rd

Our 'Year of the Sea' event proved very popular - 86 people attended which demonstrates a very great interest in our maritime history!
This was a joint event with West Wales Maritime Heritage Society, a Society we are pleased to work with and which has made a great contribution to Pembroke Museum.
We had two speakers.  First Ted Goddard gave a fascinating account of the Early Days of the Dockyard and some of the ships which were built there. It always amazes me to see what was achieved by this town of Pembroke Dock - hard to believe now that it was a world leader in shipbuilding in the 19th century.  It built Royal Yachts and many famous ships. One of these, Ted told us, was HMS Erebus, one of Sir John Franklin's ships on his fateful last expedition.
A ship that is very dear to Pembroke people is the Warrior and David James of West Wales Maritime Heritage Society shared his memories of the ship when she was a moored off Llanion where she was used as an oil jetty.  He remembered fishing off there as a boy while others in the audience joined in with their memories.  One of these was Frank Harries who worked there and had amusing anecdotes to share.
In 1976  Warrior was towed away for renovation at Hartlepool - now restored to all her former glory she can be seen in the Royal Dockyard, Portsmouth.

Posted by Linda, pembrokehistory@live.co.uk at 9:35 PM No comments: