At the Christmas Market 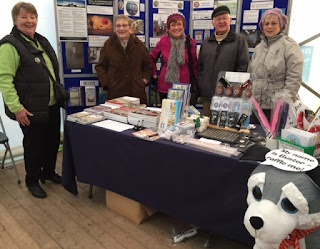 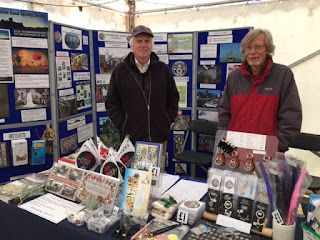 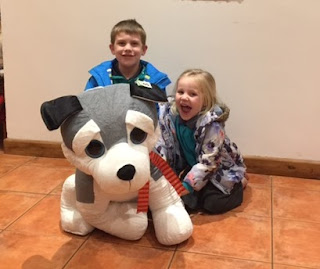 Pembroke Castle Christmas Market was again a great success and we again held a stall to advertise what we do - as well as raising funds with the sale of our books and merchandising.  Rose Blackburn donated a very large dog for us to raffle which proved very popular - the raffle was drawn in the Town Hall by the Town Clerk on Monday and the lucky winning ticket was number 101.  This was purchased by Dominic Stanley pictured here with his little sister Lily-Rose- clearly delighted to have won!
Posted by Linda, pembrokehistory@live.co.uk at 9:40 PM No comments: 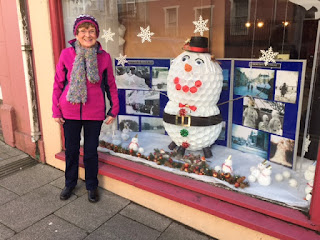 We have entered the Pembroke Town Council shop window competition with this snowy offering.  All credit to Vicki Haggar for masterminding this snowman made of recycled white cups and to Rachel Norman for making the smaller ones from pompoms (think we need a close up!).  We managed to find some historic snow scenes as a background - some from the famous winter of '82.
Posted by Linda, pembrokehistory@live.co.uk at 9:35 PM No comments: 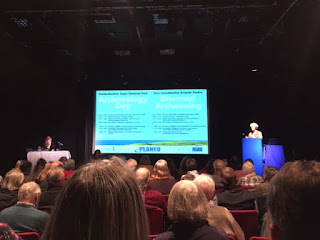 We took part in the annual Archaeology Day organised by the PCNP and Planed.  A most interesting talk was given by Liz Rawlings of the Llangwm Historical Society - we really must organise a visit to see the amazing work this Group are doing.
Posted by Linda, pembrokehistory@live.co.uk at 9:33 PM No comments:

Our Christmas Quiz a great success! 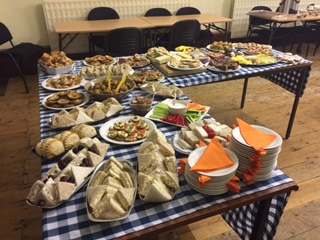 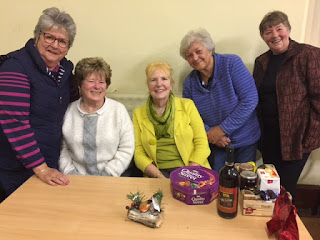 Our Christmas Quiz proved very popular raising £204.  Worthy winners against much opposition were Meg Burrell, Mel Phillips, Pam Evans and Pru Pattison pictured here with Quiz Master Rose Blackburn (right). The lovely buffet was prepared by the committee of the P&M History Society and the raffle organised by Rachel Norman.

Posted by Linda, pembrokehistory@live.co.uk at 9:32 PM No comments: 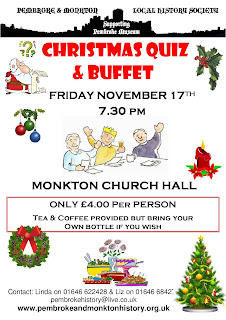 Posted by Linda, pembrokehistory@live.co.uk at 4:36 PM No comments: 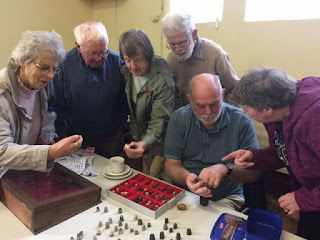 Metal Detector John Thompson gave a talk at our Coffee Morning on Saturday, bringing with him a collection of thimbles which he has accrued over many years.  The thimble he told us reveals an amazing social and technological history.

The earliest known thimble, in the form of a simple ring — dates back to the Han Dynasty ancient China. Thimbles dating to the 10th century have been found in England, and thimbles were in widespread use there by the 14th century. Although there are isolated examples of thimbles made of precious metals—Elizabeth I is said to have given one of her ladies-in-waiting a thimble set with precious stones—the vast majority of metal thimbles were made of brass. Medieval thimbles were either cast brass or made from hammered sheet.

Early centers of thimble production were those places known for brass-working, starting with Nuremberg in the 15th century, and moving to Holland by the 17th. In 1693, a Dutch thimble manufacturer named John Lofting established a thimble factory in Islington, in London, expanding British thimble production to new heights. He later moved his mill to Buckinghamshire to take advantage of water-powered production, resulting in a capacity to produce more than two million thimbles per year. By the end of the 18th century, thimble making had moved to Birmingham, and shifted to the "deep drawing" method of manufacture, which alternated hammering of sheet metals with annealing, and produced a thinner-skinned thimble with a taller shape. At the same time, cheaper sources of silver from the Americas made silver thimbles a popular item for the first time.

I don't think anyone realised that there was such history behind the simple thimble.  After the talk those present were encouraged to examine the thimbles - John's talk and collection certainly created a great deal of interest.

Posted by Linda, pembrokehistory@live.co.uk at 4:28 PM No comments: