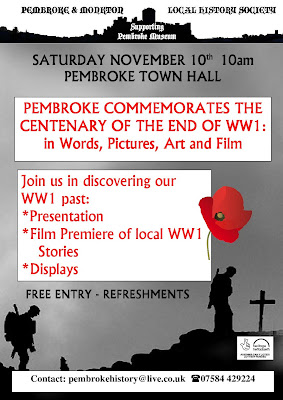 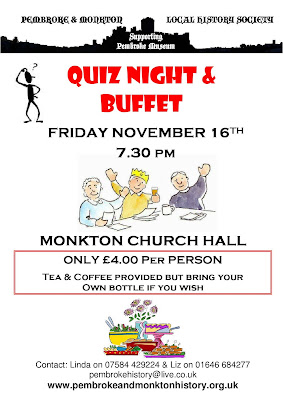 Posted by Linda, pembrokehistory@live.co.uk at 10:22 PM No comments:

We had a great response to the first meeting of our Autumn talks programme with 48 attending.  The speaker was popular local historian Terry John who spoke on a rather intriguing topic ‘The Tudor Spice Box: an insight into the variety of herbs and spices in a Tudor kitchen and the weird and wonderful ways in which they were used!’

Terry traced the history of the lucrative spice trade – a trade which developed throughout South Asia and the Middle East by at earliest 2000 BC. The Egyptians used herbs for mummification and their demand for exotic spices and herbs helped stimulate world trade. Early uses were connected with magic, medicine, religion, tradition, and preservation.  Spices were among the most demanded and expensive products available in Europe in the Middle Ages, the most common being black pepper, cinnamon, cumin, nutmeg, ginger and cloves. In addition to being desired by those using medieval medicine, the European elite also craved spices and herbs for the flavouring of foods. Spices were all imported from plantations in Asia and Africa, which made them expensive. From the 8th until the 15th century, the Republic of Venice had the monopoly on spice trade with the Middle East, but with the voyages of discovery came competition and the discovery of new herbs and spices.

Posted by Linda, pembrokehistory@live.co.uk at 10:10 PM No comments:

Field of the Fallen - October 19th

Friday October 19th saw the opening of our Remembrance Art Display - Field of the Fallen.  Invited guests included the Leader of Pembrokeshire County Council, Cllr Aden Brinn and Mayor of Pembroke, Cllr Linda Brown as well as the Vicar of St Mary's, Rev Peter Jones.
The project was devised by Linda Asman and Rose Blackburn.  The idea being that each candle would represent one of the Fallen and so highlight the large numbers who gave their lives from just one small town during WW1, a terrible war which resulted in deaths and casualties on a massive scale.
'Field of the Fallen' is part of a larger project of the History Society: 'Pembroke Commemorates the end of WW1 in Words, Pictures, Art and Film' funded by Heritage Lottery.  The candles were sponsored by local people to help fund our 'There not not There Tommy' which now stands by the Church gate. Money was also raised through a Local Giving appeal.

Posted by Linda, pembrokehistory@live.co.uk at 10:06 PM No comments:

Our display in St Marys 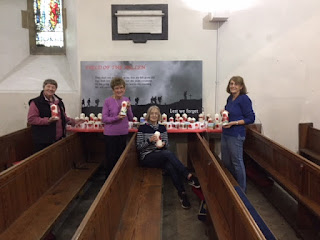 Today we assembled the candles in St Mary's Church - do call in to take a look. 97 candles: each one bearing the name of one of the Fallen and all painted with poppies at the VC Gallery.  Thanks to all who supported our Tommy fundraising appeal - he is now standing to attention by the Church gate. 5 perspex Tommies are sitting in the pews. 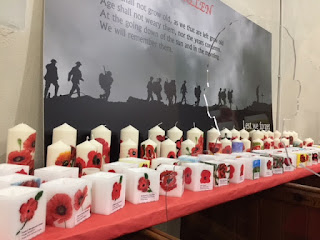 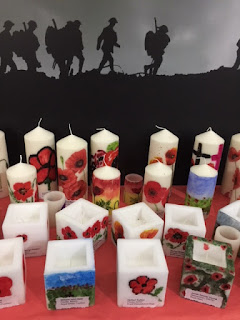 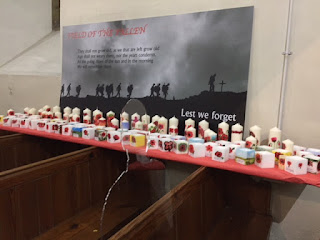 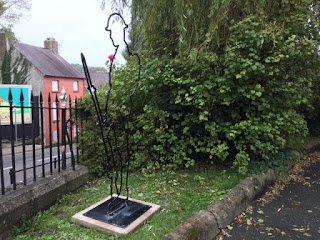 Posted by Linda, pembrokehistory@live.co.uk at 9:50 PM No comments: 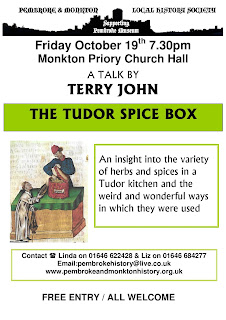 Posted by Linda, pembrokehistory@live.co.uk at 2:43 PM No comments:

At the VC Gallery Pembroke Dock 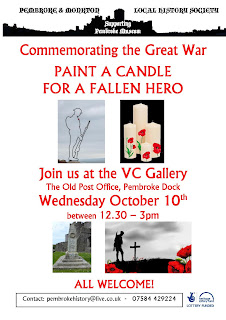 We are working with VC Gallery, Pembroke Dock to create an art installation to commemorate Pembroke’s fallen heroes of  WW1.
A community workshop was organised  on Wednesday, October 10th at the VC Gallery, and members of the community dropped in to paint the candles with poppies - even the police!  A lovely occasion, and mission accomplished with all candles decorated!
The Society has been researching the identities of the soldiers named on the Cenotaph. and the intention was to decorate candles, each bearing the name of a fallen soldier ,with a poppy to form a memorial display.  The artwork is to be called ‘Field of the Fallen’ and will be displayed in St Mary’s Church, Pembroke where there is presently a WW1 exhibition of photographs and stories about the impact of the Great War in our locality .
This is part of a Heritage Lottery sponsored project  'Pembroke Commemorates the Centenary of the end of WW1' 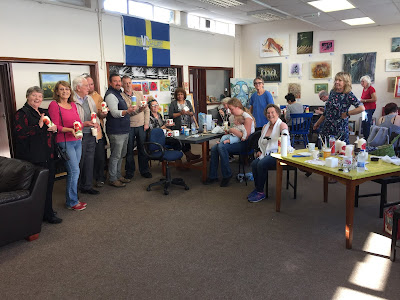 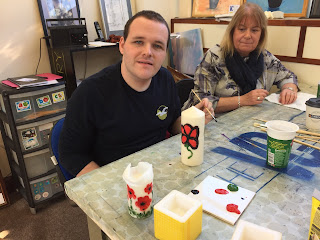 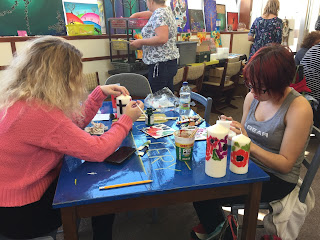 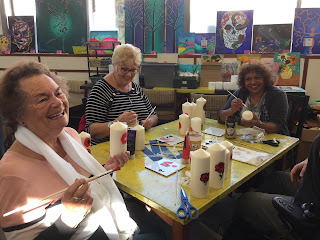 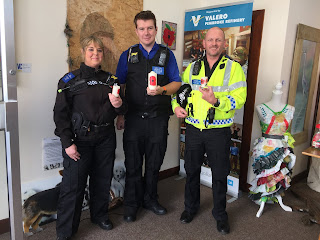 Posted by Linda, pembrokehistory@live.co.uk at 2:40 PM No comments:

On Saturday October 6th Pembroke & Monkton History Society welcomed 2 speakers to its monthly Talk and Coffee Morning in Monkton Church Hall.
Keith Johnson began with his talk ‘From Pugwash to Pembroke: the Hurlows of Monkton Bridge and the Canada timber trade’, shedding light on a little-known aspect of Pembroke's history - the activities of the Hurlow family of Bridgend House, Monkton, who were prominent merchants, ship-builders and seafarers in the early 19th century.
Between about 1808 and 1830, the Hurlows built a number of fine brigs and schooners at Cunnigar on the Monkton shore, opposite .  Many of these ships were built for the timber trade and sailed regularly between Pembroke and carrying emigrants to the and returning with cargoes of timber, often with one of the Hurlow men as skipper.
Seafaring across the north was a hazardous business, and the Hurlows suffered their share of disasters.  Thomas Hurlow spent four days in mid lashed to a topmast, with just a lump of raw beef to eat, after his ship was swamped by a gale.  He was eventually rescued and became a prominent figure in Pembroke as a councillor and property developer.  His brothers George and William were not so fortunate; both perished on voyages to distant ports.
Keith's talk ended with a plea for a study to be made of the Bridgend site which, with its walled gardens, stone quays and 'lost' mansion house, is a neglected area of the town in more ways than one.


David James followed Keith with an introduction to his new publication: ‘Hancock’s Shipbuilding Company in Pembroke Dock: the ships and the men who built them’.  Launched last week at Hancock’s Yard, the book has already proved popular with local people and sales have been extremely good.   After his talk, David signed many more copies.
Posted by Linda, pembrokehistory@live.co.uk at 2:09 PM No comments:

Saturday afternoon saw the launch of David James’ latest book ‘Hancock’s Shipbuilding Company in Pembroke Dock: the ships and the men who built them’.  Appropriately, the event took place in Hancock’s Yard, which is now the home of the West Wales Maritime Heritage Society, an organisation of which David is secretary.
David is a well known local personality, author of several maritime books and a popular speaker.  His popularity is such that the book launch, organised by Pembroke & Monkton Local History Society, drew large numbers.  The Society has a publications arm and this is its third major local history book.
Chairman Linda Asman opened the event by thanking Mr Peter Hancock MBE for travelling back to Pembroke Dock to attend.  Mr Hancock spoke of the time he set up his company, returning to Pembrokeshire in 1962 wanting to live his dream of building ships like his grandfather had done – and for almost the next 20 years he did just that.  He thanked David for gathering together the stories and memories of the company, stating that it was a privilege to have worked as part of that wonderful community of men who displayed such pride in their work.  Together they built over 40 craft of one sort or another.
Many ex employees attended the event and enjoyed the opportunity to reminisce, wander around the boat yard and visit the maritime museum which the WWMHS has set up in one of the buildings.  The book proved popular too – 105 books were sold during the course of the afternoon! 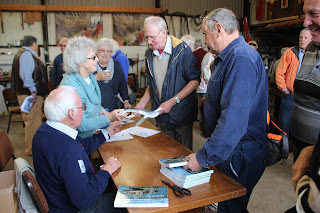 Posted by Linda, pembrokehistory@live.co.uk at 1:58 PM No comments: