December in Pembroke with Santa and Christmas Trees

December began with Breakfast with Santa in Pembroke Town Hall - a big fundraising event organised by St Mary's Church and well supported by the community.  The Churches work hard to raise funds and an event we like to take part in is the Christmas Tree Festival in Monkton Priory Church.
“It gets better and better” was the verdict on ’s third Christmas Tree Festival which ended on Friday 12th December.  This ancient Church was the lovely setting for the Festival, which again proved be a great success.  Each year there has been a theme to consider: the first year entrants had to make a Christmas Tree and decorations entirely out of recycled materials; last year the theme was St Nicholas and this time participants had to choose a carol to illustrate.  Organisers Ken, Pauline and Mike Davies were delighted with the response: in total 23 trees were entered from local schools and community groups making a beautiful and colourful display throughout the Church.
We also entered the Christmas Tree shop window competition.  I chose the theme of the Christmas Panto, making a display of photographs taken during the '60s of the St Michael's Pantos which were then hugely popular.  Such a shame this Christmas tradition has died out.
Thanks to Steve James for the photos (Steve wrote the story of the Panto in our book and DVD),  to Rose for the loan of the tree and Sandi at the Tabernacle Kindergarten for the props.
Unfortunately, once again, we didn't win. 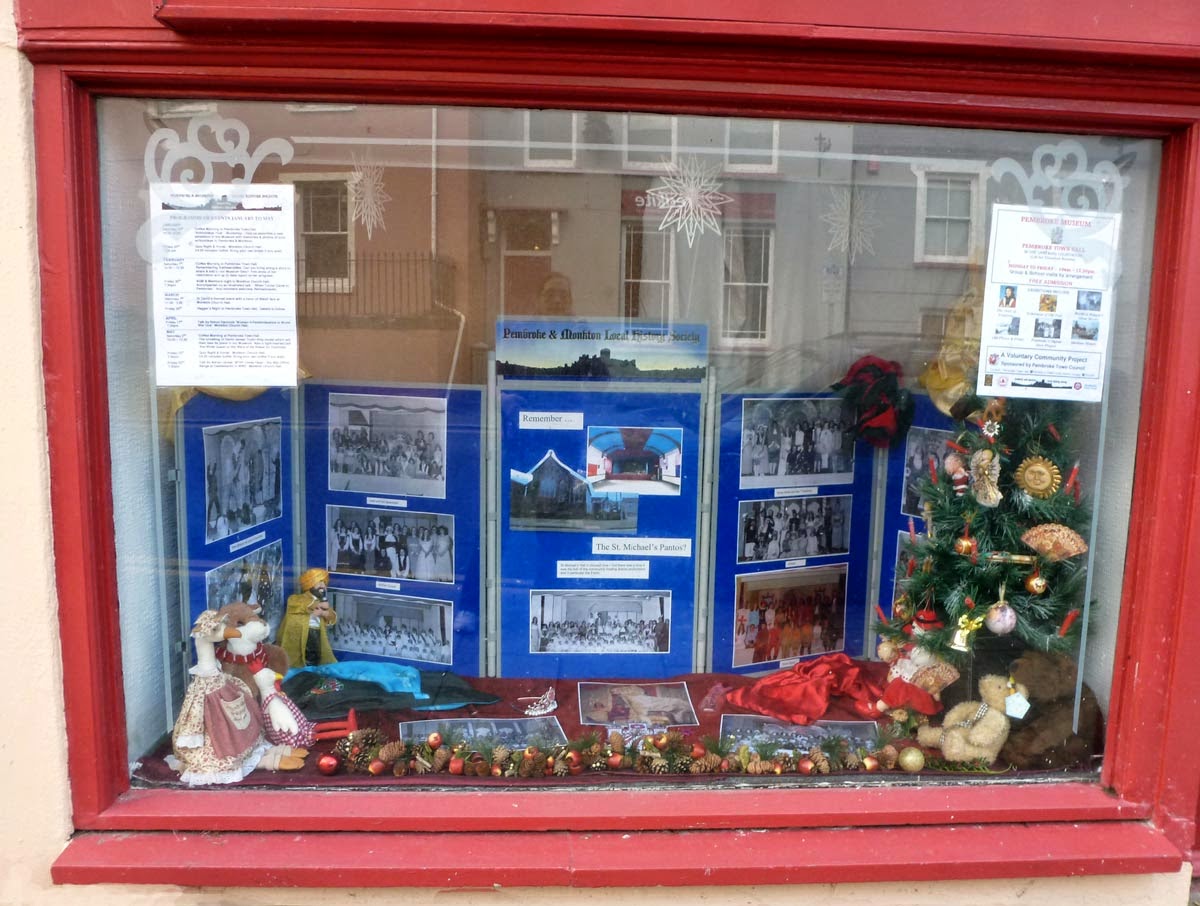 Posted by Linda, pembrokehistory@live.co.uk at 5:54 PM No comments:

Christmas kicked off early in Pembroke with the Christmas Market at Pembroke Castle on November 28th.  This is a very big event attracting thousands so we put together a stall to promote the work of Pembroke Town Council and  Pembroke Town Hall which, as well as housing both the Pembroke Murals and Museum, is  a great venue for events.  Town Councillors and Museum Volunteers manned the stall throughout the three days of the Festival creating much interest our work  and in the Town Council's plans for regeneration which include a new Town Trail and a statue of Henry VII.


In the evening Santa came to town, abseiling down the Keep then proceeding in his sleigh down the Main Street to St Michael's Square, followed by a huge crowd - the largest seen in Pembroke in many a year!  There were carols around the Christmas tree and boxes of sweets given out to the children.  We were blessed with a lovely, fine, mild night.

Posted by Linda, pembrokehistory@live.co.uk at 5:41 PM No comments:

November Events - a trip to Narberth Museum and a Christmas Quiz 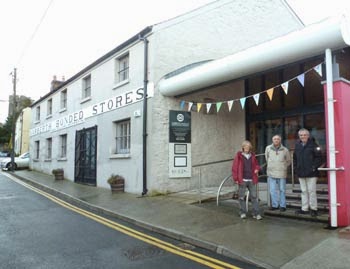 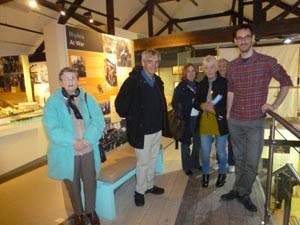 On Friday, November 7th, fourteen of us went on a visit to Narberth's award winning Museum - very impressive and just shows what can be done when the community gets together behind a project. I wonder if Pembroke will ever get the Museum it deserves? 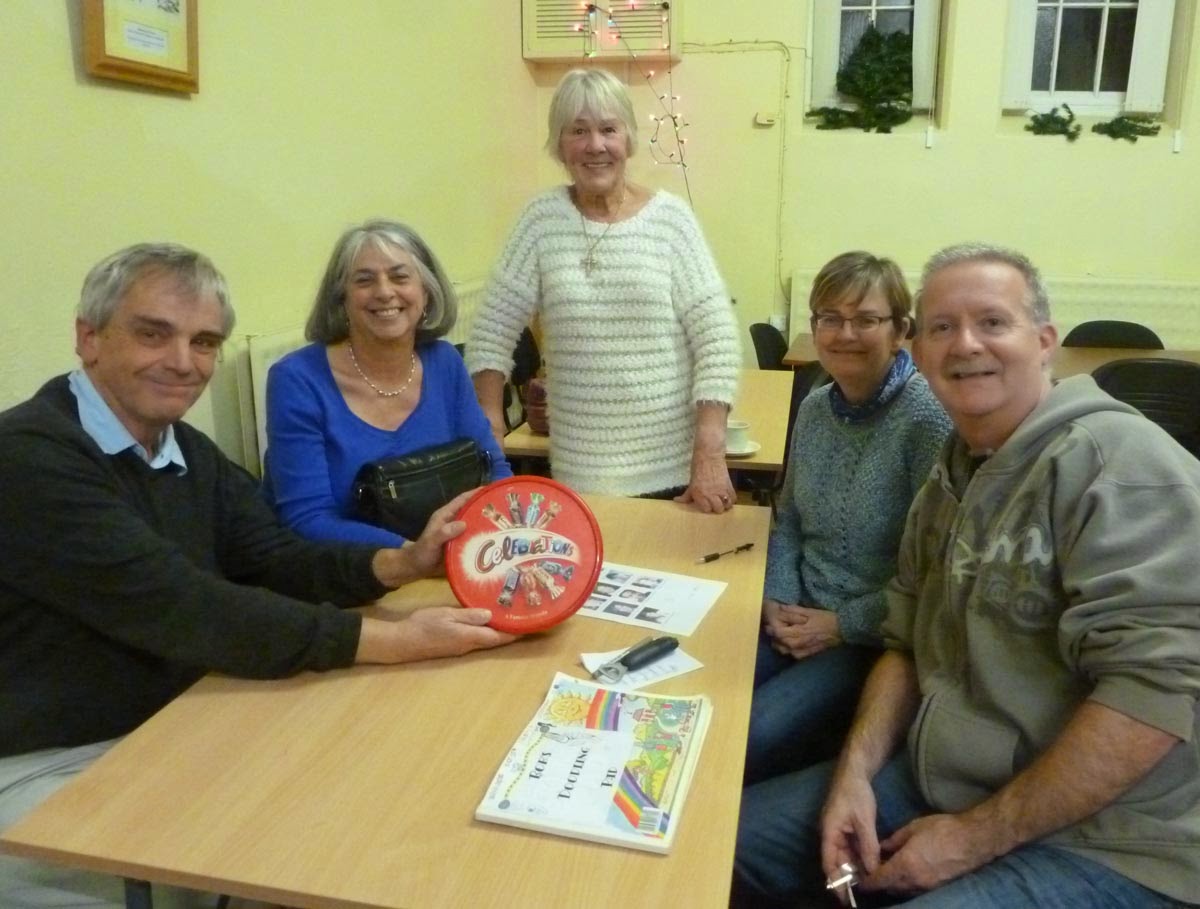 On Friday November 21st, we held our Christmas Quiz.
Posted by Linda, pembrokehistory@live.co.uk at 5:21 PM No comments:

In February the Pembroke & Monkton Local History Society launched the Pembroke WW1 Project to research the effect of the Great War on Pembroke.  On Saturday last they held a follow up event in , an event sponsored by Pembroke Town Council.  During the course of this year the Society has assembled an exhibition about the impact of the War locally which can be seen in until the end of November.  At Saturday’s event this was supplemented with displays from other Heritage groups – the Royal Artillery Association, Pembroke Civic Trust, West Wales Maritime Heritage Society and the Dyfed Archaeological Trust.
It was a busy morning with two speakers – George Lewis, President of the Pembroke & Monkton Local History Society, and Alice Pyper from the Dyfed Archaeological Trust (DAT). 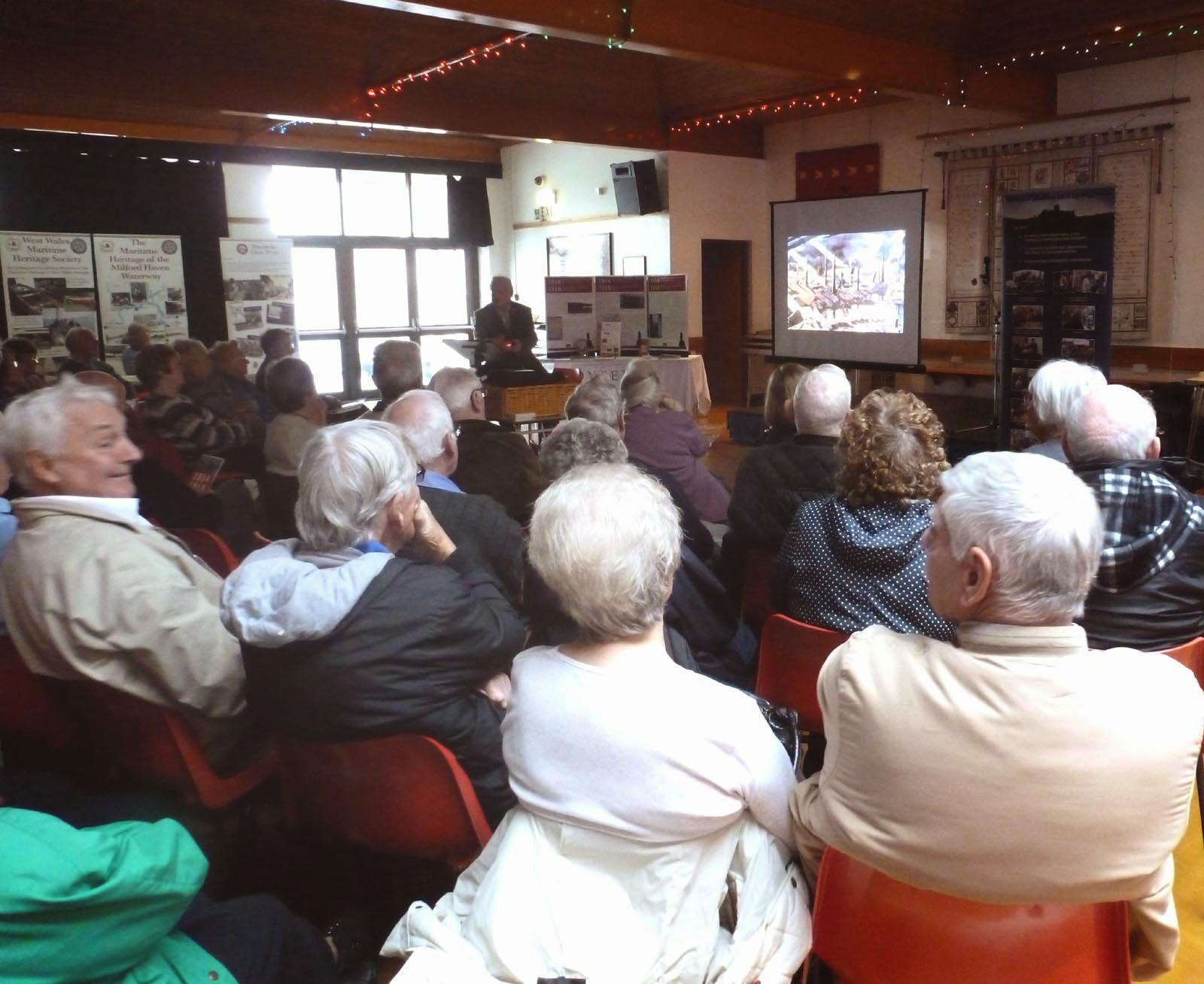 Posted by Linda, pembrokehistory@live.co.uk at 4:59 PM No comments:

We launch our Book and DVD! -Saturday October 4th 2014 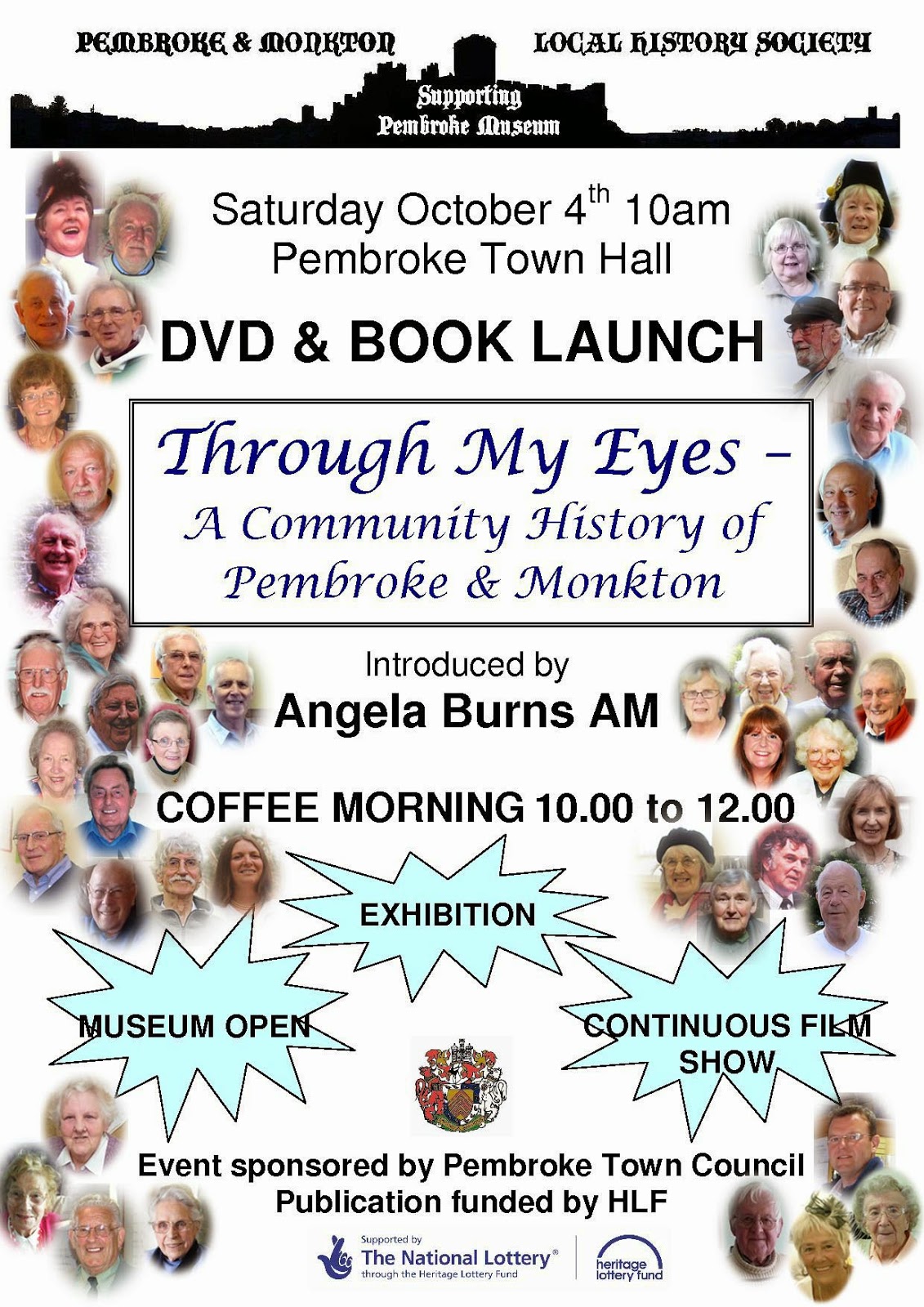 At last! Our major work ‘Through My Eyes, a Community History of Pembroke and Monkton’ has been published and was launched on Saturday October 4th by Angela Burns AM and  Pembroke’s Mayor Clr Aaron Carey.  Angela Burns introduced the book to a crowded Town Hall, complimenting the Society on producing such a fascinating book, a unique history of the community of Pembroke which has involved so many people. It is a fine example of volunteering, of people giving up so much of their time to produce something of value to the community.  Chairman of the Society. Linda Asman thanked Mrs Burns for her kind words, then gave a short presentation to describe the project and to thank all those who helped bring it about.

In particular the Society Project Committee, Matt White for producing the DVD, Keith Johnson for the editing the book and above all the many members of the community who gave up so much of their time  to write and narrate their stories.  ‘Through My Eyes’ traces the history of our community through the individual stories of 45 people.  The previous evening, the Society had held a pre launch party for the participants and their families, over 90 people attending an enjoyable evening with a buffet prepared by the Society’s hard working committee.

The response to its publication has been overwhelming – 170 books were sold in the first two hours!
I do think that this response illustrates the extent of community involvement in the project and the huge interest in our great past.  I hope in this project we have at least done something to capture that sense of place which is Pembroke, to share the memories as well as to preserve them for posterity.
Through My Eyes is now available for you to buy in .  The book, which was published with a grant from the Heritage Lottery Fund, costs £12 with a £2 discount for members.  The DVD is given free with the book.  All proceeds from sales will be invested in future projects of the Society and in which it supports.
Posted by Linda, pembrokehistory@live.co.uk at 4:50 PM No comments:

September in Pembroke and in Swansea 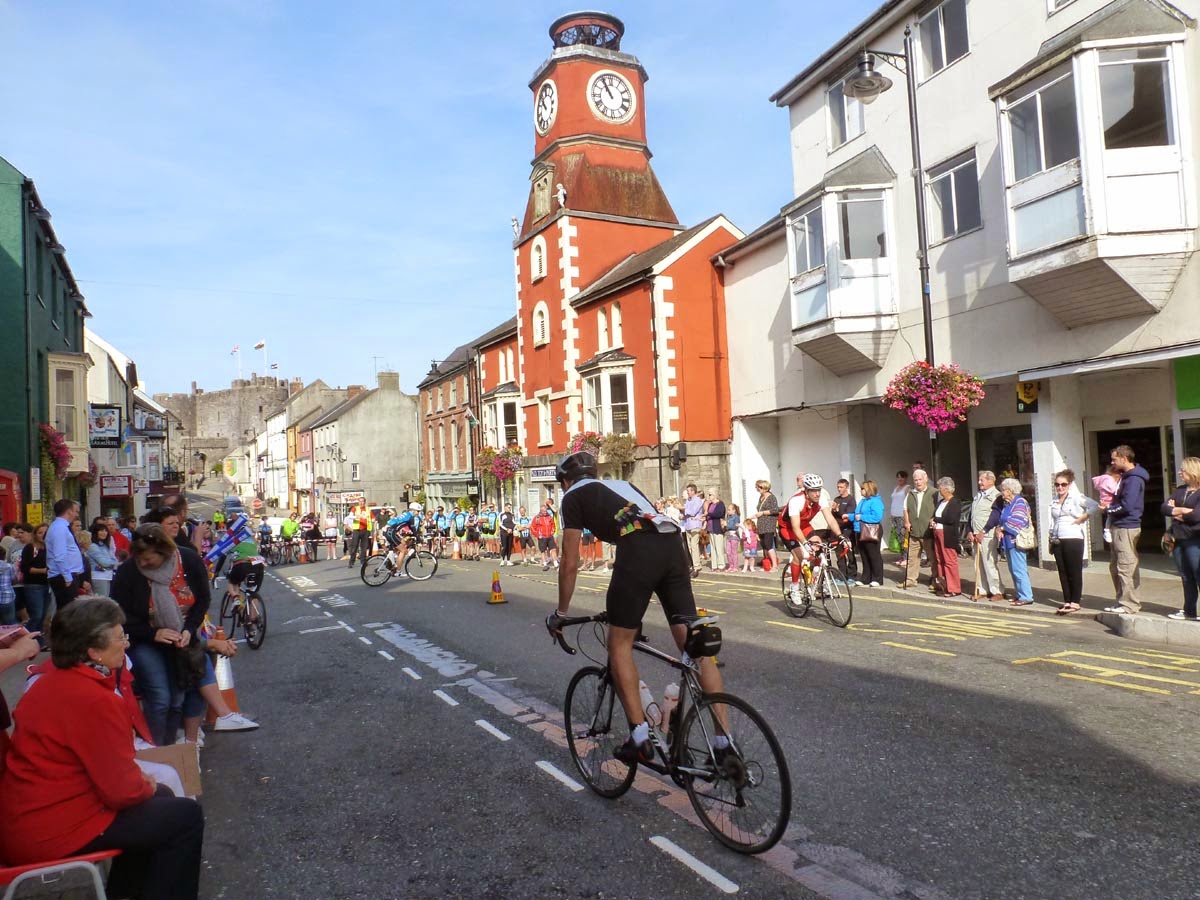 The big event in Pembroke this month was the Iron Man contest on September 14th - the Main Street was closed as contestants cycled along the Street in the circular route from Tenby and back. 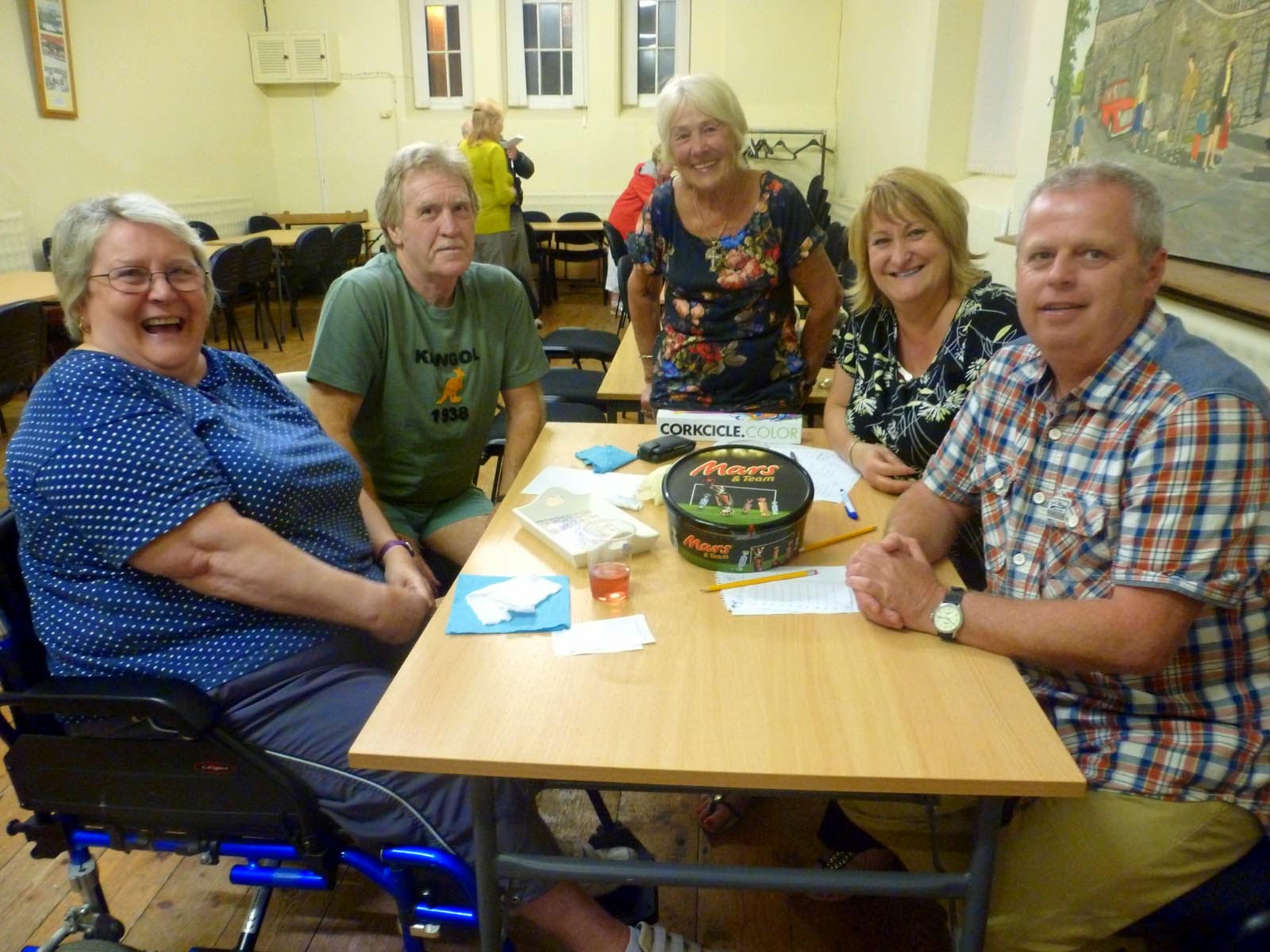 Our Autumn programme kicked off with Quiz Night on September 19th.  Colin and George represented the Society at the Local History Fair on September 27th which clashed with the Joint Conference of the South West Maritime History Society and the West Wales Maritime Heritage Society for which Stuart and I put together a presentation on aspects of Pembroke’s maritime past.

This took place at the Swansea Waterfront Museum, a modern build of steel and glass, it is situated in ’s Martime Quarter although it is not a maritime museum as you might think (was disappointed about that).   It  actually sets out to, and I quote, ‘tell the story of how industry and innovation have affected the lives of people in over the last 300 years’. 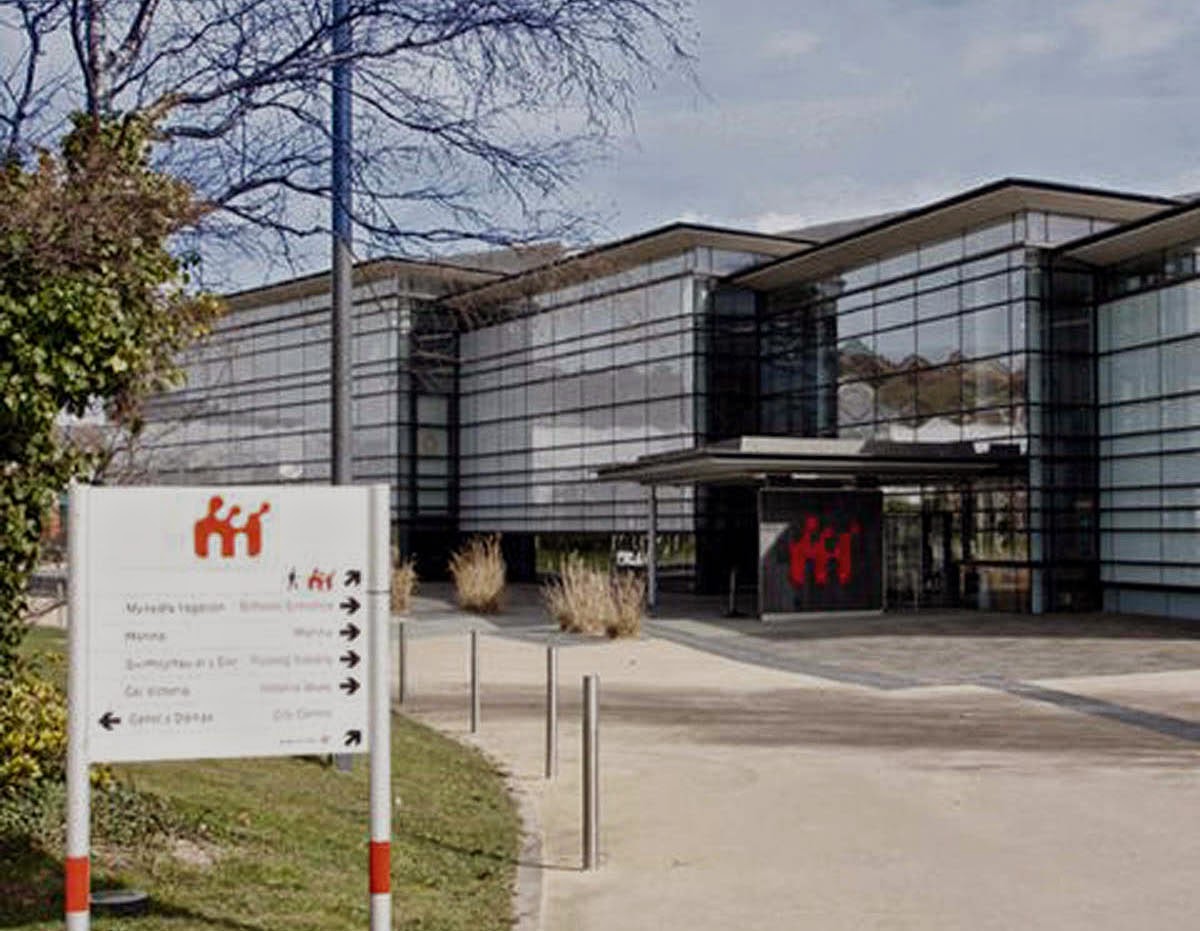 It was built at huge cost with ‘the latest in interactive multi-media technology’ but this is not to my taste – I find this reliance on audio visual, sound effects,  touch screens (hate them, they rarely seem to work!) gimmicky and non museum like.  I found it all very confusing, especially as the interpretation screens were glass and lit from the back, a jumble of Welsh and English, with my poor eyesight I couldn’t make any sense of it.

Copperopolis
The reason for siting an industrial museum here is ’s industrial history.   Before the Industrial Revolution, was famous as a watering place, the ‘Brighton of Wales’, no less.  However, possessing plentiful coal reserves and situated on a navigable river, it was also ideal for industrial development.  Welsh coal, combined with copper ore from Cornwall and Devon, made Swansea the pre-eminent centre for the world’s copper industry, which led to its being known popularly as ‘Copperopolis’. However, it was no longer a pleasant place to live as the pollution was intense but ‘where’s there’s muck there’s money’: grew wealthy and provided employment on a massive scale.  Its population mushroomed.  A contemporary poem said it like this:
‘It came to pass in times of yore
The devil chanced upon Landore
Quoths he – by all this fume and stink
I can’t be far from home, I think!’
To house a museum about our industrial past in a pristine, clinical building with exhibits in sparkling glass cases does, to me, seem rather incongruous.

Posted by Linda, pembrokehistory@live.co.uk at 4:37 PM No comments: