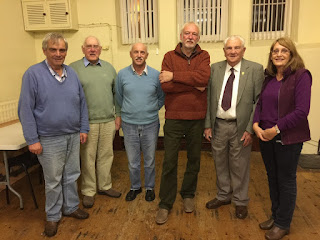 ‘Pembrokeshire Murders’ was the topic of Keith Johnson’s talk at Monkton Church Hall last Friday and this drew a large audience despite the bad weather conditions.  Well known author and former editor of Pembrokeshire Life magazine, Keith is well familiar with local murder cases having scripted the ‘Music Hall of Murder’ which was performed to much acclaim by the East End Flyover Company at the Torch Theatre.  Keith began his talk with the shocking case of Tenby’s Mayor, Thomas Athoe and his son who murdered George Merchant in 1722.  The two set upon George and his son with such savage frenzy that poor George’s nose was bitten off before being strangled.  This appalling act resulted in the hangman’s noose.
But not all murders were quite as brutal – Keith cited one where the pathetic perpetrator earned clemency and escaped hanging.  In the year 1864 Mary Prout gave birth to a baby girl in Narberth workhouse. Mary was poor, alone and unmarried: to have baby out of wedlock carried a great social stigma. She left the workhouse and began the eight mile walk to her grandmother’s house in the village of Amroth, carrying her new-born baby but on the way she threw the baby down a disused mineshaft. She was subsequently charged and convicted of the wilful murder of her newborn baby, a crime that carried the death sentence. However, Mary Prout’s case resulted in widespread public sympathy and she escaped the death sentence: fourteen years later she was released and returned to Pembrokeshire where she married a farmer (James Rees) in 1883 and had two more children.
A murder that has a Pembroke connection was that of William Roblin, the last man to be hanged in Pembrokeshire.  His body was anatomised and dissected, then buried within the prison grounds without Christian ceremony. But, even then, he was not allowed to rest in peace. His body was dug up and the skeleton sold. After passing through several hands, most of it was lost - except the skull. And that now lies in a box in Pembroke Castle. How it got there remains a mystery!

Our next talk on Saturday, November 4th 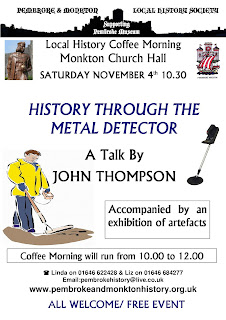 Posted by Linda, pembrokehistory@live.co.uk at 6:11 PM No comments:

Ron's Birthday in the Museum

Museum volunteers met on Thursday morning to celebrate Ron's birthday with coffee and cakes.
Posted by Linda, pembrokehistory@live.co.uk at 6:08 PM No comments:

We begin our Winter Talks Programme 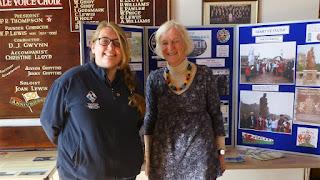 We began our Winter Talks programme on Saturday October 7th at Pembroke Town Hall with a talk by Carew Castle Discovery Guides Alex Powell and Christian Donovan 'Carew Castle and Sir Rhys ap Thomas: the man who killed Richard III'.
Between them, the ladies gave a detailed presentation of the life of Sir Rhys and his relationship with Henry Tudor - his support was crucial to Henry's victory at Bosworth and it is believed that it was he who delivered the death blow.
Rhys remained a close ally and trusted friend to Henry and, in recognition for his loyalty, he was made a Knight of the Garter in 1505.  To celebrate this honour Sir Rhys held a great tournament at Carew Castle in April 1507, the last tournament to be held in this country.
Posted by Linda, pembrokehistory@live.co.uk at 10:07 PM No comments: