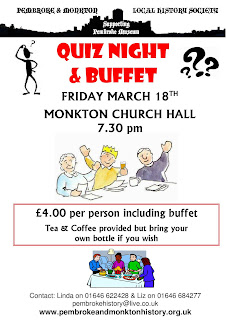 Due to popular demand our Quiz Nights continue bi-monthly with a good crowd attending - we only charge £4 - very good value as this includes a lovely buffet.  £170 was raised for Society funds. Our next Quiz Night will be held in July and proceeds from this one will go to the Henry VII statue appeal.
Posted by Linda, pembrokehistory@live.co.uk at 9:08 AM No comments:


Our annual St David's Lunch gets more and more popular each year and that numbers were up this year was helped by a very interesting talk by Richard Blacklaw-Jones on 'Patagonia:the Welsh Colony'.  Richard is a direct descendant of Edwin Cynrig Roberts and talked about the achievements of his great,great great grandfather who, aged 9, emigrated with his family to Wisconsin in 1847.  A Welsh Colonial Movement began around 1856 in the United States, where some of the Welsh settlers saw that their fellow countrymen were losing their language and culture and becoming Americans. Roberts became prominent within the movement there, and in 1861 travelled to Wales to gain support for a Welsh colony in Patagonia.  He travelled throughout  Wales giving talks and became a part of the Liverpool Emigration Society to organize the venture.  He formed part of the vanguard  of settlers who in 1865, arrived in Madryn Bay.  A few weeks later the rest of the settlers arrived on the ship Mimosa.  Despite initial hardship, the little colony survived thanks to the support of the Argentinian government and the friendship of the Mapoochi Indians.  Edwin married Ann Jones, a passenger on the Mimosa - some of Richard's family still live in Patagonia.

There was much interest in the audience and many questions. Following the raffle, lunch was served and around 50 people stayed to enjoy a lovely meal of soup, crusty bread, desserts and coffee etc.  In all £340 was raised and all proceeds of the morning were given to Monkton Priory Church.


Posted by Linda, pembrokehistory@live.co.uk at 9:55 PM No comments: 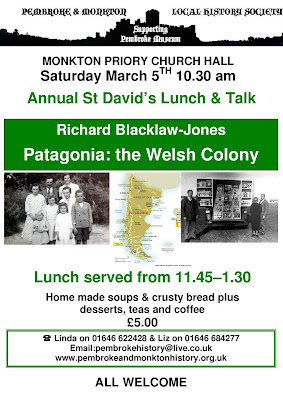 Posted by Linda, pembrokehistory@live.co.uk at 4:25 PM No comments: 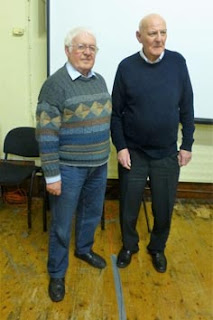 We had a very good attendance at our AGM and welcomed 2 new Trustees - Mary Willington and Ron Rees.  Pauline Waters has been elected vice Chair and no contenders for the other positions which remain the same with yours truly, Linda, as Chairman.  I live in hopes of a successor!!
After business, we had a fascinating talk by Ted Goddard on 'Nelson in Pembrokeshire'.  An excellent speaker.
Posted by Linda, pembrokehistory@live.co.uk at 4:24 PM No comments: