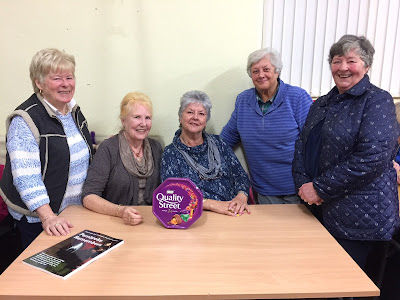 We held a Quiz Night and Buffet on Friday November 22nd in Monkton Church Hall, which proved very popular despite the inclement weather.  The winning team was 'The Golden Girls' Mel Phillips, Pam Evans, Meg Burrell and Pru Pattison, pictured here with Quiz master, Rose Blackburn.
A lovely buffet was provided by the ladies of the Committee and the event raised £226, which will go towards funding the Society’s projects:  at the moment these include the William Marshal Statue and the Dragon fountain project.

Posted by Linda, pembrokehistory@live.co.uk at 9:18 AM No comments: 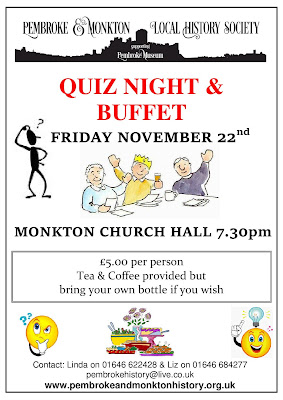 Posted by Linda, pembrokehistory@live.co.uk at 7:53 PM No comments: 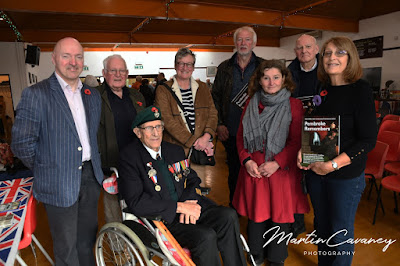 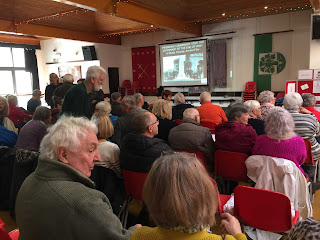 Pembroke & Monkton Local History Society’s Commemoration Event on Saturday November 9th proved very popular with the launch of the Society’s latest book ‘Pembroke Remembers: a Memorial publication recalling the part played by Pembroke and District in The Great War and recording some of the local events marking the Centenary of the War'.
Proceedings were introduced by Society President Frank Harries BEM who welcomed all present and gave a warm welcome to Lynne Edwards and volunteers of the VC Gallery, Pembroke Dock who had been invited to bring along an exhibition of their art. Also welcomed were guest speaker, Dr Simon Hancock, and special guest, D-Day Veteran Ted Owens, whose memoirs were published by the Society earlier this year.
Linda Asman then introduced the book, which was written as a result of the Society’s Heritage Lottery funded project ‘Pembroke Commemorates the Centenary of the end of WW1: in words, pictures, art and film’. She stated that her aim in writing the book was to look at the effect of WW1 specifically on Pembroke, Pembroke Dock and district and its people. It was a book that needed to be written for, while many books have been written about WW1 especially during the years of Centenary 2014 –18, little has been published about this area of south Pembrokeshire, scene of such great activity then due to the strategic importance of Milford Haven and the Royal Dockyard.
Many people participated in the project and Linda thanked her fellow historians for their invaluable input, the many people who had come forward with information, photographs and personal stories and above all her editor Keith Johnson whose superb page layouts have resulted in a lovely book with great popular appeal. And, of course, the hard working History Society volunteers who have done so much to promote the history of Pembroke and organise events such as this. 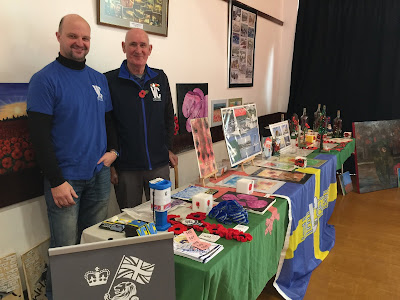 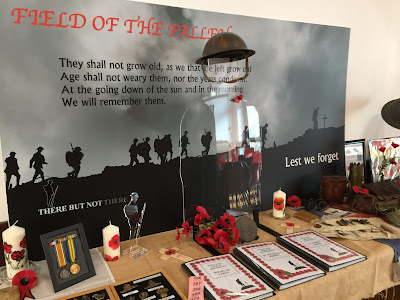 Posted by Linda, pembrokehistory@live.co.uk at 5:32 PM No comments:

Pembroke & Monkton Local History Society is pleased to announce the launch of their latest publication : ‘Pembroke Remembers:  a Memorial publication recalling the part played by Pembroke and District in The Great War and recording some of the local events marking the Centenary of the War'.

The book launch will take place in Pembroke Town Hall on Saturday morning, November 9th at 10am.  There will be a talk by Dr Simon Hancock on ‘The Great Peace’ as well as an exhibition of work by the VC Gallery. All are welcome and there will be an accompanying Coffee Morning. 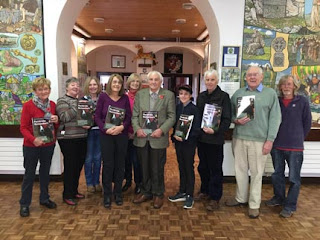 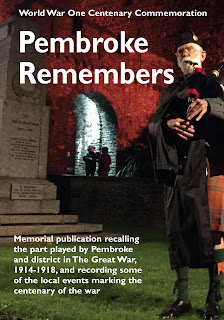 Posted by Linda, pembrokehistory@live.co.uk at 4:43 PM No comments: