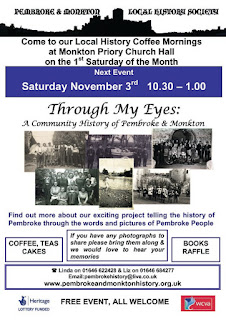 We have three events this month, all at Monkton Priory Church Hall:

On Saturday, November 3rd we have our monthly coffee morning and exhibition from
10.30 – 1.00.  I    shall be giving a presentation about our Heritage Lottery supported project: ‘Through My Eyes- a Community History of Pembroke and Monkton.’ This is an important work, probably the most important thing we will ever do.  The aim is to paint a picture of Pembroke in the 20th Century through the eyes of the people who have lived it.  About 40 people will be involved in recording their stories, each with a different outlook.  The end result will be a DVD and an accompanying book.  The work is being done completely voluntarily with funding to cover only the publication and professional fees involved. All are welcome and entry is free.
Friday, November 16th at .
David James will be giving a talk: ‘Pembroke People – some of the great and famous who have visited here’.  David is well known for his work with the West Wales Maritime Heritage Society and is a popular speaker.
Friday, November 23rd at .
Christmas Quiz Night and Social.  £3.50 includes buffet – bring your own bottle if you wish.

In addition, on Saturday November 17th we will be participating in the PCNP’s at which runs from to .
Posted by Linda, pembrokehistory@live.co.uk at 12:41 PM No comments: 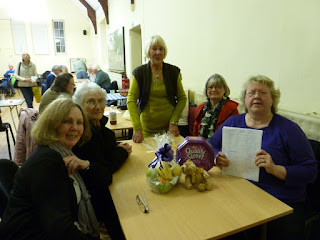 Last Friday we held a Quiz Night at Monkton Priory Church Hall.  These events are always popular and, having the good fortune to have the support of several good cooks, the buffet is first class.  People are always so generous in contributing to the buffet and raffle and a big thank you to all.  Congratulations to the winning team ‘Golden Girls’ – Liz Jenkins, Pat Hearn, Sue Clode, June Hearn - pictured here with Quiz Master, Pauline Jenkins. £119 was raised.
Posted by Linda, pembrokehistory@live.co.uk at 12:39 PM No comments: 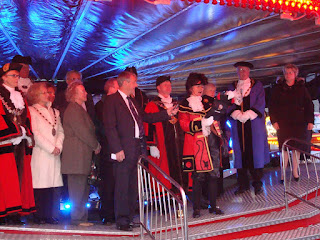 Pembroke Michaelmas Fair
The opening of the Michaelmas Fair i is a great tradition in Pembroke and a real link with our past.  Its origins lie in the town’s mediaeval charters and it was formerly a hiring fair when farm workers from the area would come seek employment.  Although now a fun fair, it still takes place in and is still opened with great ceremony by the Town Crier.  Rose Blackburn will be donning her Town Crier’s garb and reading out the ’Cry of the Fair’ as her predecessors have done for centuries, albeit now from the Waltzers on Wesley Square.  I am told this used to take place on underneath the old Elm Tree.
Posted by Linda, pembrokehistory@live.co.uk at 12:36 PM No comments: 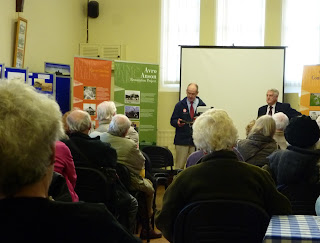 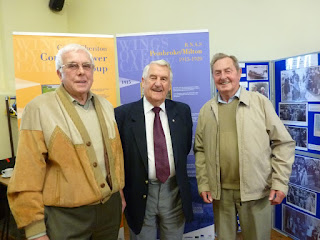 At a well attended meeting of the Pembroke and Monkton History Society on Saturday, we were pleased to welcome as our guests John Brock MBE and his son Deric Brock who came to talk to us about the Carew Cheriton Control Tower.  John has fond memories of Monkton and began by recalling some of his experiences in the war, when, as a young lad, he would cycle over to Monkton school which he attended during the bombing raids on Pembroke Dock.
Carew Cheriton Control Tower
He then told of the WWII Control Tower restoration project: now fully restored to its 1940s condition.  John informed us that The Carew Cheriton Control Tower Group was formed in the spring of 2000 after the landowner approached the Carew Historical Society with the offer of the building on a long-term lease.  The building, situated on the disused Carew airfield, was in danger of being taken down and therefore lost to future generations. Its restoration was a lot to take on but, as a result of a Parish meeting, a group was formed composed of members of the historical society and other interested people who were keen to see this building restored to its original state: 35 members ranging in age from 13 to 80.   The Welsh Assembly had then given grants to begin restoration work: fortunately there were people who could still remember the Control Tower as it was enabling them to put it back to its 1940’s condition.
A great tribute
Deric, who is author of “Wings over Carew”, then took over with a slide show of some of the large archive of photographs collected and the stories behind them.  Another achievement of the Group has been the production of a DVD of wartime memories and photographs resulting from the project.

John concluded that he is so proud of what has and is still being done in recording the history of what happened at Carew.  He pointed out that over 100 people lost their lives in the bombing raids on this airfield: what has been achieved here is a tribute to the many who lost their lives.
Posted by Linda, pembrokehistory@live.co.uk at 12:31 PM No comments:

Our Quiz Night on October 19th 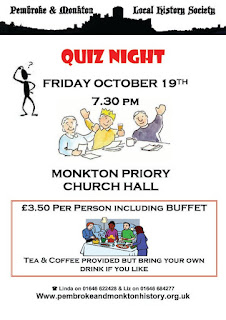 Posted by Linda, pembrokehistory@live.co.uk at 9:11 PM No comments: