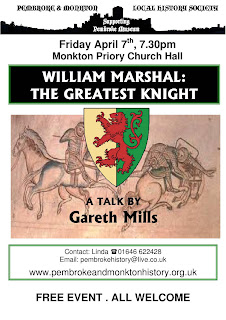 On Friday evening in Monkton Church Hall, Gareth Mills drew a large audience to his talk on 'William Marshal: the Greatest Knight'.
William Marshal is one of the great heroes of British history - a man whose life would make an amazing epic.  Yet many have not heard of him!  A younger son of a minor noble, he rose to become champion of the tournament and mentor to 4 kings: Henry II, Henry the Young King, King Richard I (Lionheart) and King John. He was an architect of Magna Carta 1215. Finally he became Regent following the death of John who left a young heir Henry III.  William epitomized knightly virtues and was unswervingly loyal. He was also Earl of Pembroke and was responsible for building the castle in stone.
Posted by Linda, pembrokehistory@live.co.uk at 6:48 PM No comments: